Overheard in a pub somewhere in Drogheda:

“Where are the kids from? They’re fantastic!”

“Minnesota in the States.”

“It’s in the middle at the top—on the border with Canada.”

Center for Irish Music students, parents and instructor Brian Miller were back putting Minnesota on the map at the All Ireland Fleadh in Drogheda, County Louth this August for the school’s second organized visit to the week-long festival of Irish music and weekend competitions. Thirteen young CIM students and their families experienced an incredible week of Irish music and culture in Ireland; some for the first time. Our young musicians took classes from world-class musicians, met and played sessions with their peers from Ireland and elsewhere, performed on the fleadh’s “Gig Rig” stage, squeezed in some site-seeing, attended concerts, and represented the “Midwest region” of North America impressively in music competitions. 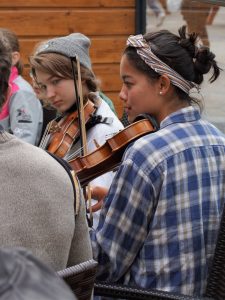 This was also CIM’s second time entering a Céilí Band in the age 15-18 competition category. With seven out of ten members of the (recently christened) Nick Coleman Céilí Band able to make the trip to Ireland, we asked three young musicians from the shores of Lake Michigan to sub in with our group. We were lucky to have Aisling on flute (Chicago), Evelyn on fiddle (Chicago) and Ethan on button accordion (Kenosha, WI) join us as they played beautifully and became new friends who accompanied us on our rambles and sessions around Drogheda all week. Instructor Brian Miller ran céilí band rehearsals throughout the week (thanks to Eamonn and Alisa Mee for finding the rehearsal space!) and the band performed fantastically at the Saturday afternoon competition.

We were thrilled when CIM student Victoria Pierce was awarded 3rd place in accompaniment for her sensitive guitar backing. Congratulations Victoria! Very few US-based competitors managed to place at this year’s competitions, so this was no small feat! 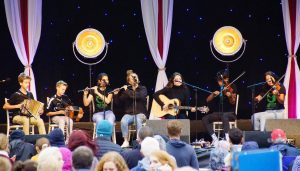 As in the past, this year’s fleadh trip inspired our students to do incredible amounts of woodshedding and refinement of their playing that will reap benefits for years to come. The trip also strengthened bonds of friendship and comradery among our students and families. These two threads wove together in the evening hours each night in Drogheda as CIM students (and a few dads!) joined in sessions around town with confidence and a well-tuned sense of what it is all about—fun and community.

Thanks to the parents for the commitment of time and money to make this trip happen, to the instructors who prepared the students, and to the broader CIM community for donating to the cause and believing in our amazing kids. We could not have done this without you!